Yup, my yard is still overrun with critters.  From my old friends the turkeys, to geese, chipmunks and squirrels, here is a view of one day and what I may see looking out of the windows of my old house.

This Turkey Lady decided it was time for her beauty bath.  Uh, she kind of needs it. 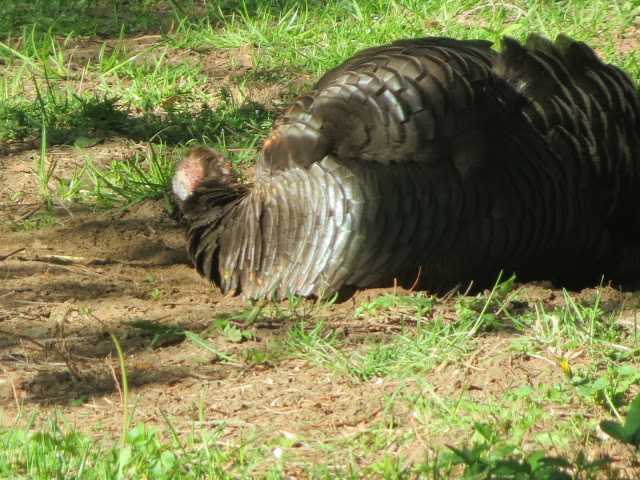 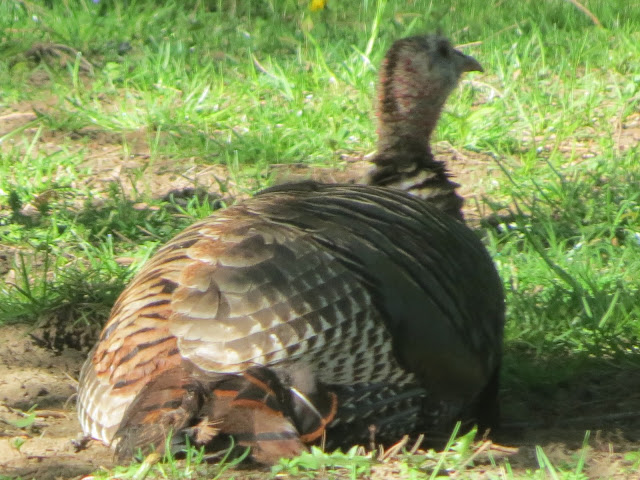 Meanwhile, I have, again this year, been visited by the Canada Geese.  This year, there are eight of them, and they are a real nuisance.  My yard is full of poop, and I have come to the conclusion that I am going to have to quit putting food on the ground for a while, until they give up and go away.  It's a pity that they are such a messy bird, though, because they are really beautiful. 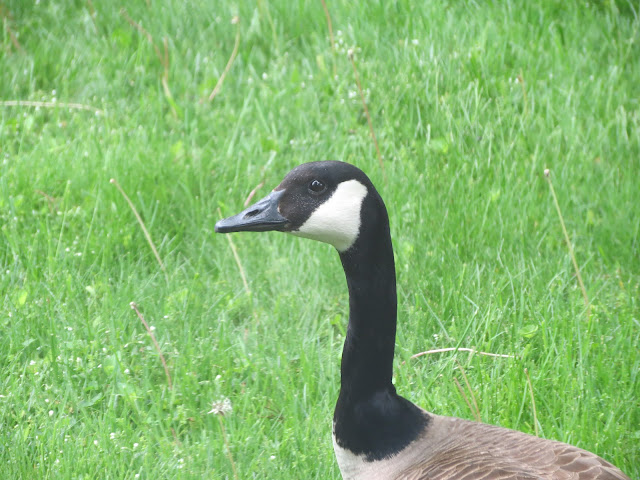 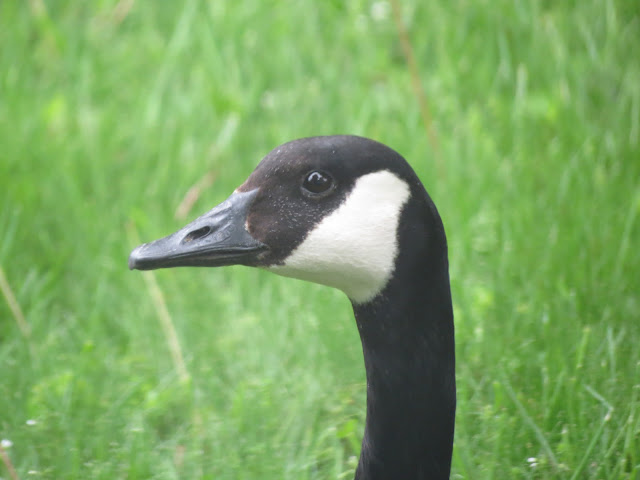 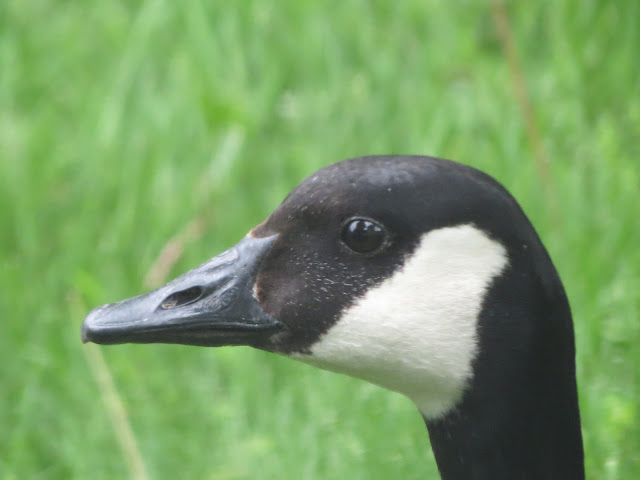 But small mammals are equally well represented.  This chipmunk was cracking me up.  I've seen squirrels on the sunflower seed feeders before, but, never chipmunks on the niger seed feeders.  It must only take 90 gazillion of them to fill those little cheeks. 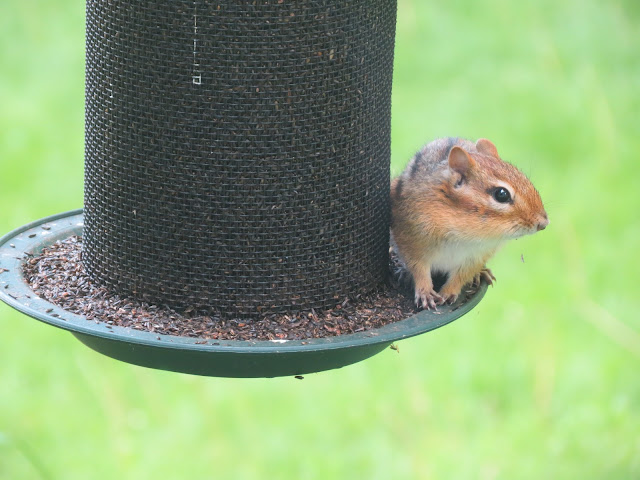 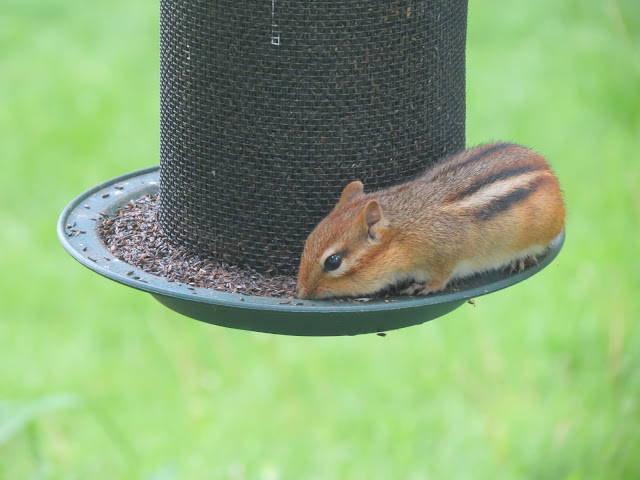 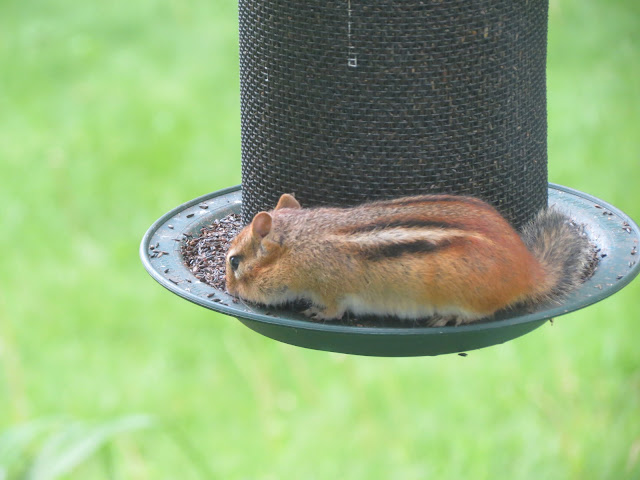 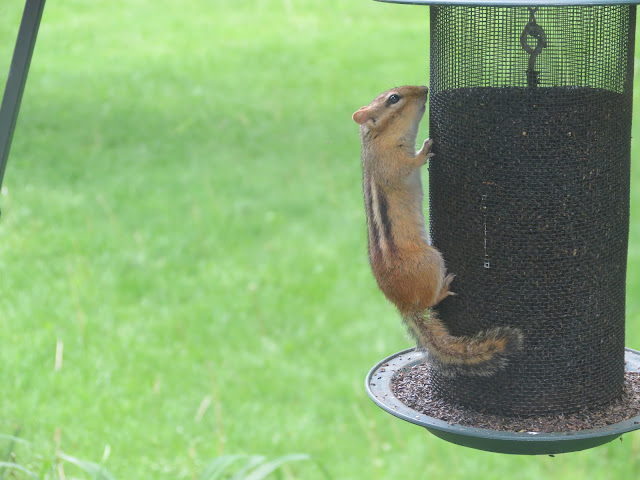 Rachael was very interested in this little guy, right outside of the window, too. 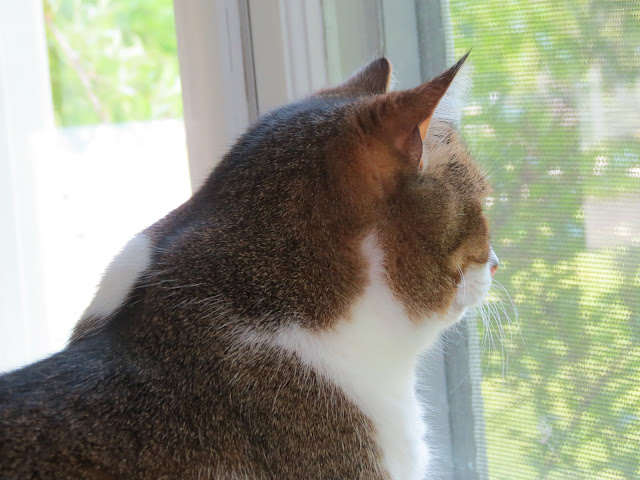 Squirrels, oh yeh, there were squirrels, too.  Very determined, as always, and very successful, too. 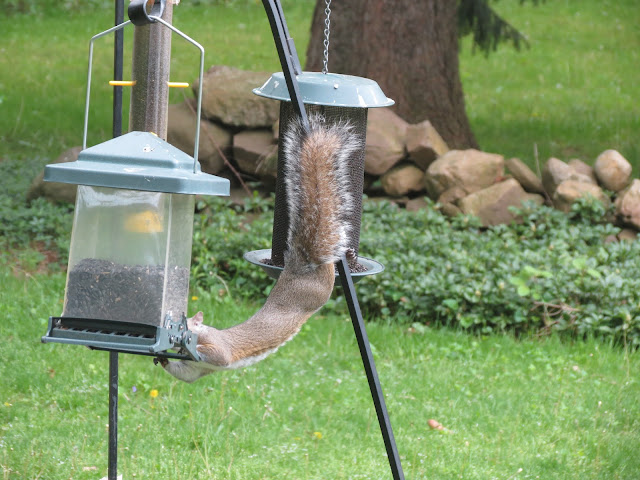 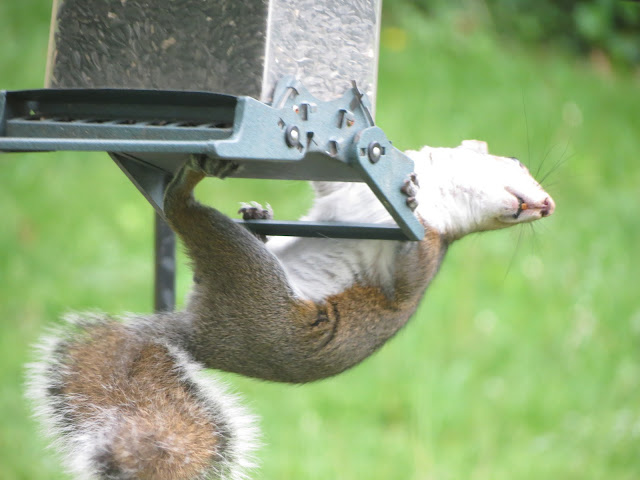 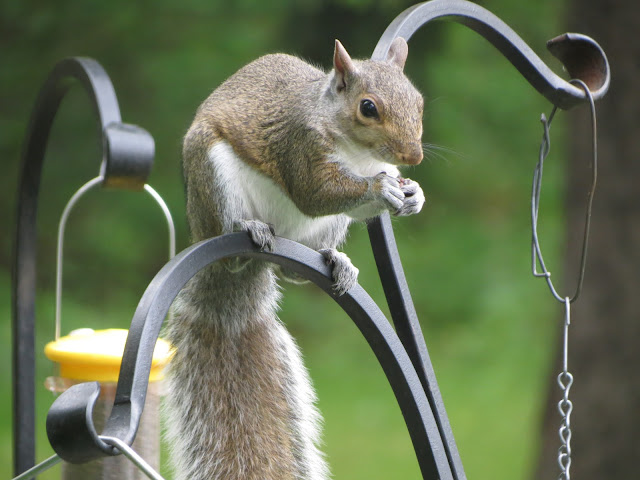 Oh yes, I love my old house, and the critters that visit.  Minus the Geese.

My Promise Mare died three years ago.  At that time, I decided that I would not get another horse.  Horses these days can easily live to be 30 years old, or even more.  I keep my horses for life, in great part because I am afraid of what might happen to them, out there in the wide world.  Since I'm not young any more, I didn't want to chance having a horse outlive me.

While I was volunteering at the track, I saw lots of lovely horses.  But, it was easy to resist them because track Thoroughbreds are all so young.  I no longer volunteer there, so that temptation is behind me.

But, I made many friends in rescue while I was actively involved, and, every once in a while, I still get emails about horses that urgently need homes.  In February, I got such an email.  It was about a mare who was no longer wanted by the family that owned her, because the daughter had lost all interest in horses.  Understandably, they found the expense of keeping a horse that nobody loved to be too much.  This mare was 25 years old.  With the economy today, it's hard to place even young horses, much less old gals like this, who really can do much of anything except a light trail ride now and then.

I pictured some old, decrepit horse, not good for much of anything.  I decided that, since no one else was likely to want her, she stood a good chance of ending up in a bad place.  And, as she was very aged, I thought that there was little probability that she would outlive me.  So, I went to look at her.

I have to admit that I was pleasantly surprised.  This is no decrepit old girl.  She's an Appendix Quarterhorse (that's a cross between a Thoroughbred and a Quarterhorse, for those of you who aren't really horse oriented),  a 16.1 chestnut beauty, in fine physical shape, for her age.  I have to admit, I fell in love.  And, I said I would take her.  The people were very good in that they gave her to me.  So, buying her was an expense that I didn't have to face.

I've only had her a couple of months, but I am enjoying her so much.  She's a very smart girl, wise in the ways of the world.  You can almost see her thinking, sometimes.  She tries little disobedient tricks every now and then, just to test me.  But, all you have to do is tell her no and she quits, often with an "Oh heck, can't get away with a thing." expression on her face.  She's calm and steady and strong enough so that I may actually be able to ride her some day, when I lose enough weight (I have lost 40 pounds, but that's another post.)

I've been lucky enough to learn her history.  She came to this area from Virginia when she was six years old.  She's had one foal, a gelding who still is showing at 17 years old.  She has been an event horse, has foxhunted and shown in the hunter/jumpers.  She was a lot of horse when she was young, keen and always ready to go.  I actually have a good friend who, it turns out, knew her in those days.  It always amazes me, what a small world the horse community is.

And now, I'd like to introduce you to Lexy, my new love.  These pictures were taken shortly after I got her, and she still has her Winter coat.  She's shedding out to a beautiful gleaming chestnut color now.  I'm waiting until she's completely shed out, then I'll take some more pictures.  The purple halter, by the way, is gone, replaced by a nice leather one. 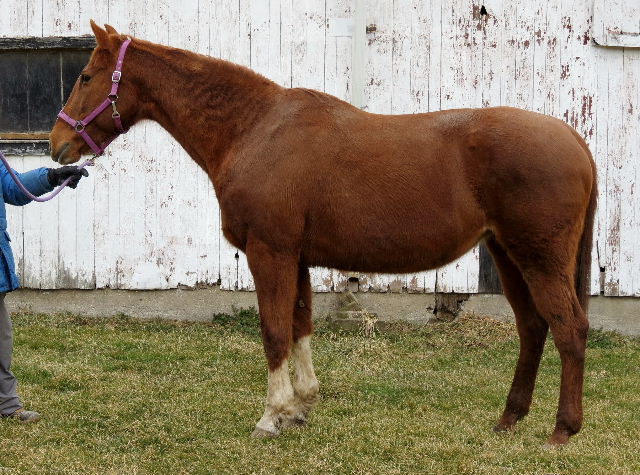 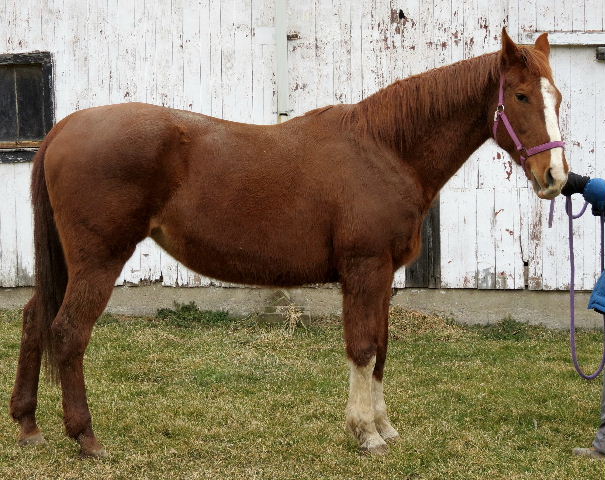 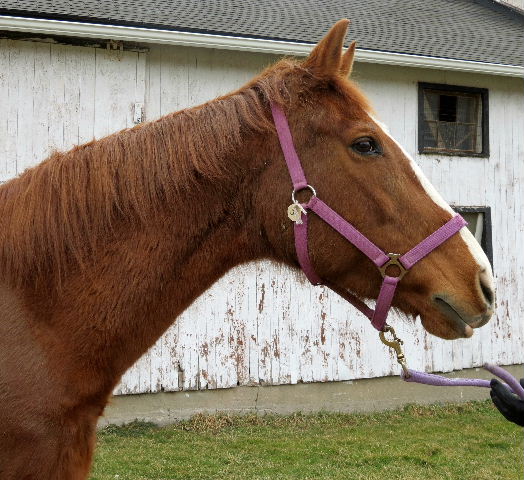 Best wishes from a not so constant blogger.  No flowers in my yard yet, so I send you lots of pictures of Summer flowers in the hopes that the sun may always shine on you. 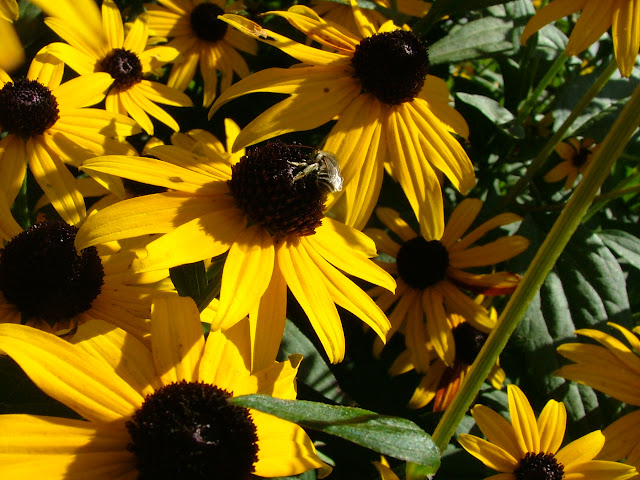 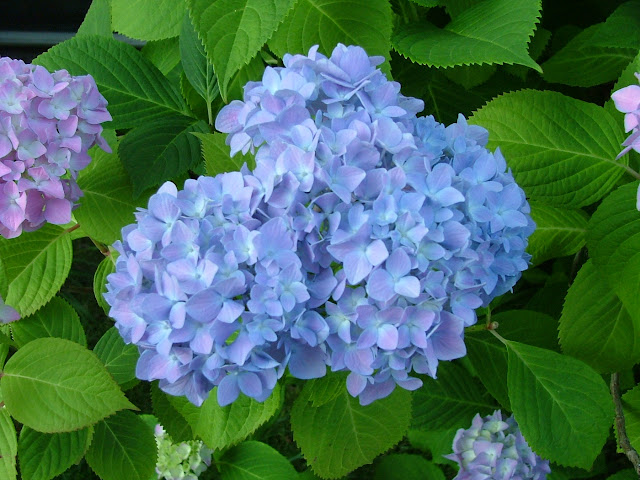 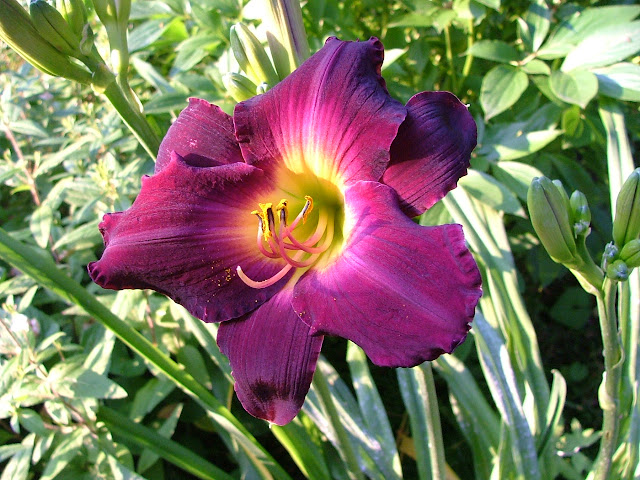 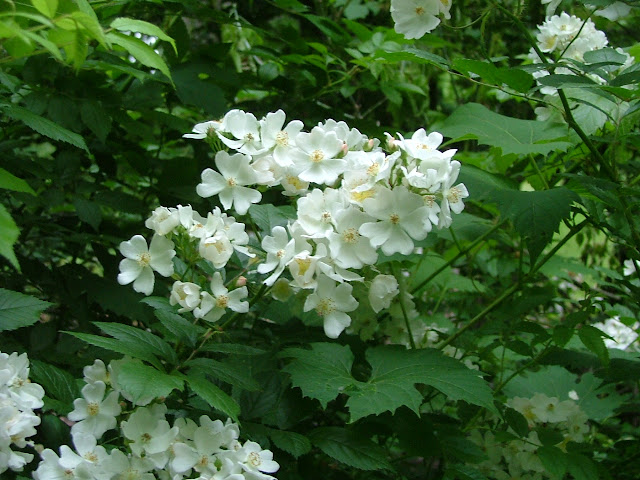 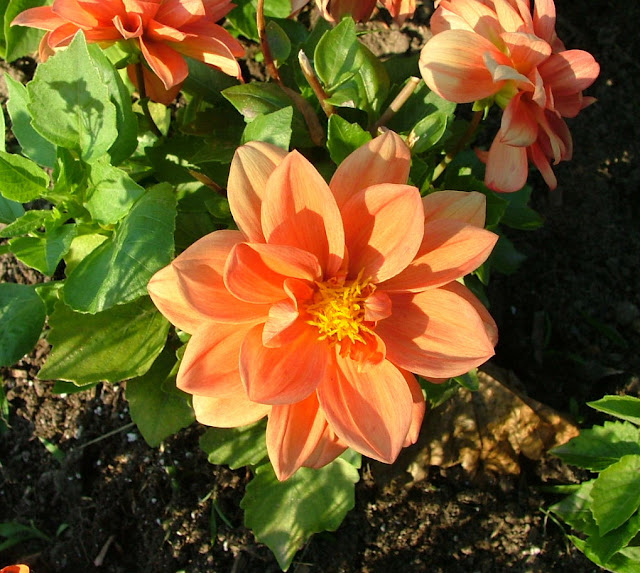 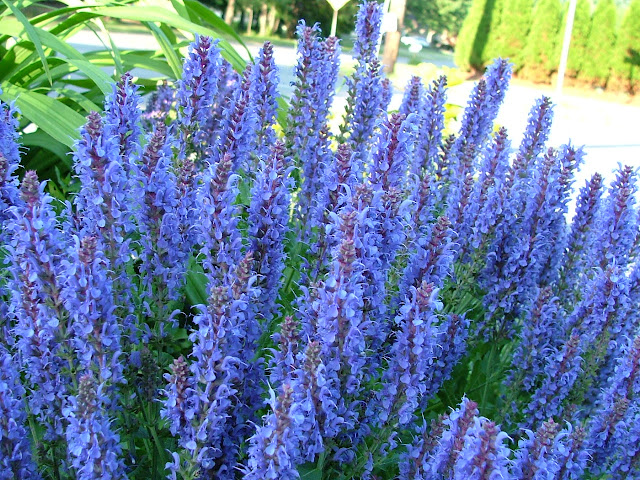 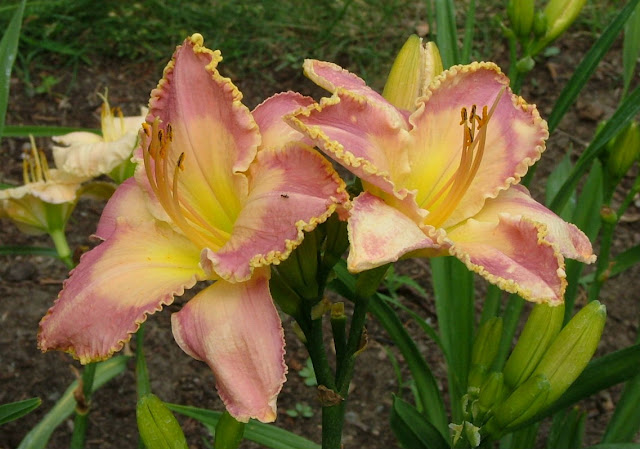 Hello, Hello! Anybody still got me on their list?

I'm back, at least for this one post right now.  I hope to be a little more regular, but I'll probably be a lot more erratic than I was in the past.  I just can't seem to find things to post about.

I guess I have two pieces of news, though.  The first is that I'm on day 17 of a diet.  I decided that it was time to lose all this extra weight that is keeping me from doing the things that I want to do.  I could stand to lose 100 pounds, but I'll be happy with less, as long as I keep it off.  So far, only weighing myself once a week, I've lost 5.5 pounds.  But, I won't bore you with constant updates on how the diet is going.

The second thing that I wanted to share with you is the wonderful sight that I saw out of my rear window this morning.  I was puttering around when I noticed that Becky Cat, who loves to sit and watch the birds out of that window, started making that chattering noise that cats make when they are excited.  I went over to the window and this is what I saw. 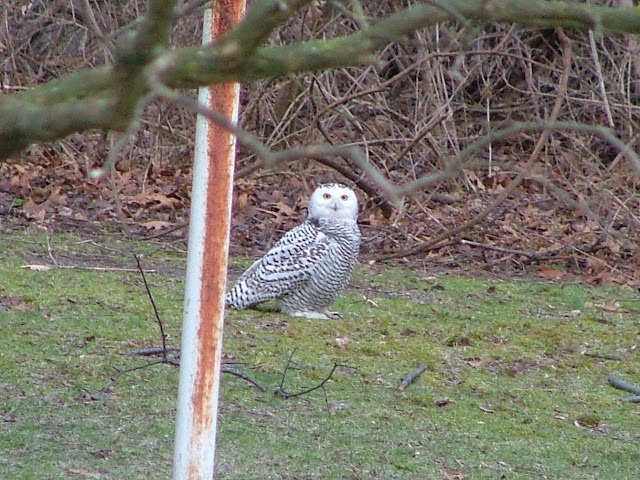 Yes, that's a Snowy Owl, sitting there in my back yard!  I knew that they were around.  There have been reports of sightings in my area.  But, I never expected to see one right here at home.  I have heard that the irruption has occurred this year because the Arctic Summer last year was very mild.  That lead to an explosion in the population of lemmings.  In the chain of events that nature often provides, this meant that adult birds had plenty of food to feed to their nestlings, leading to a larger than normal survival rate.

When the birds fledged, the young birds had to roam farther afield, to find new Winter hunting territories.  That's why we, here in New York State, are now being treated with the sight of so many of them.  This looks to me like a first year bird, probably a male, which would be in line with the theory.

Just a short while later, I got an email from my neighbor.  He had seen the bird also, and sent me this picture. 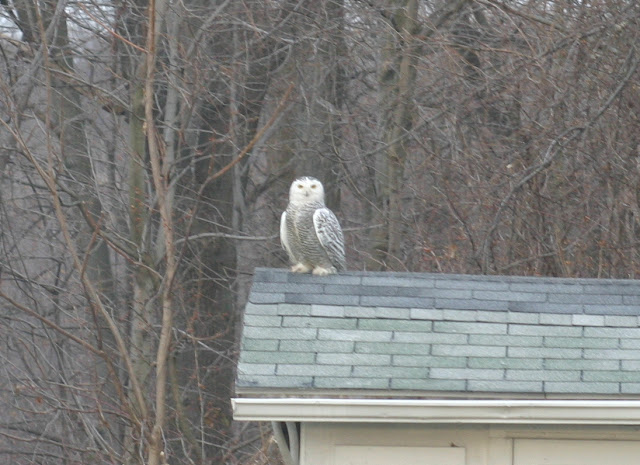 They are so beautiful, and so large.  When I first saw it, I thought it was a dog.  Hey, it was early, and I hadn't even had a cup of coffee yet.

So, there we have it, a brief update on my so very unexciting life.  I promise, I'll try to get a blog up now and again, and I also promise that I will try my best to get caught up on your blogs in the next few days.
Posted by Louise at 11:32 AM 30 comments:

I have a confession to make

I am not one of those people who just loves the holiday season.  Between that, and the short days, I become a grumpy, unpleasant person, who has absolutely no get up and go.

You probably have noticed my lack of posts lately.  Primarily, it's because I just can't get my rear in gear to post anything.  In fact, I can't even think of things to post.  Heck, I can't even get up the energy to visit my blogging friends.

So, I think I'm going to take a formal break.  I'll undoubtedly be back after the New Year.  I hope that at least some of you will still want to share experiences with me, but, I wouldn't blame you if you just kicked my butt out of the door.
Posted by Louise at 8:28 AM 24 comments: 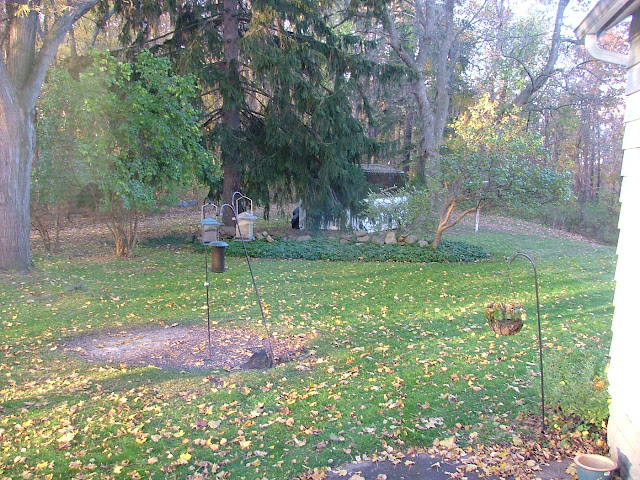 It's a beautiful Fall day here.  The temperature started out in the 30's, but got up into the 60's.  Saturday was gorgeous, too.  Nice weather for walking campaign literature, which I have been doing both days.  I'm done for this election season, and it's a good thing because my feet fell a little like raw meat.

There is a new gentleman showing up at the feeder lately.  This guy is a very handsome six-pointer.  He's very skittish, thank goodness. 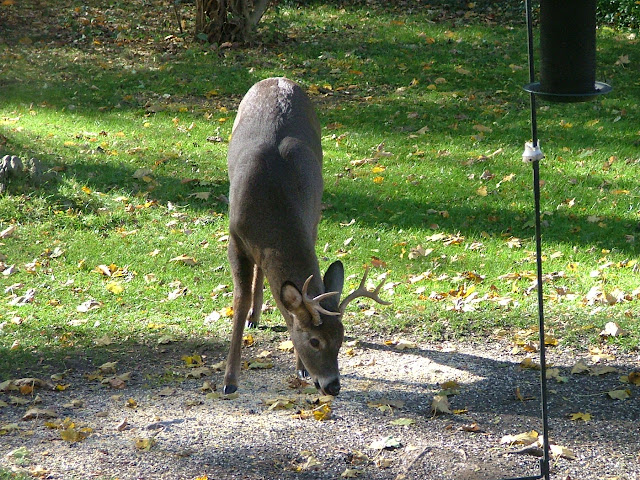 The turkey ladies were gone all week, but, today they were back in force.  They do this every once in a while, and I always worry until I see them again.  Tucker, the feral cat, does the same thing, and I worry just as much about him. 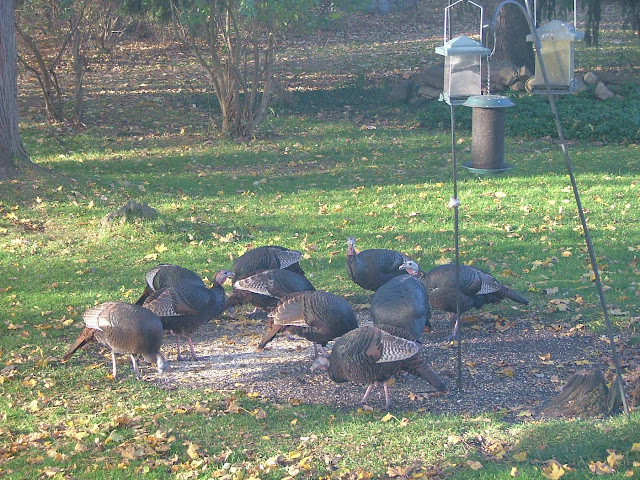 And, just to prove that I'm not the only one who likes to look out of my rear window, here's a short video of Becky doing the same.  Guess what she's looking at so intently?  I'll post the answer tomorrow morning.

Added Monday morning:  Becky is watching leaves fall.  They are coming down like rain right now and she is absolutely fascinated with them.  She spends hours on that chair, just watching.
And, finally, I wanted to pay tribute to the great Jumper, Hickstead, who died today in Verona, Italy, right after completing his round.  He collapsed on the course.  Cause of death isn't known, but speculation is high that it was a heart attack.  Competition was canceled after his death.

Hickstead was one of the great names in show jumping.  His partnership with his rider, Eric Lamaze, was one of the most successful in recent history.  My heart goes out to Eric, and all of the connections of this wonderful horse.  It will be a long time before we see his like again. 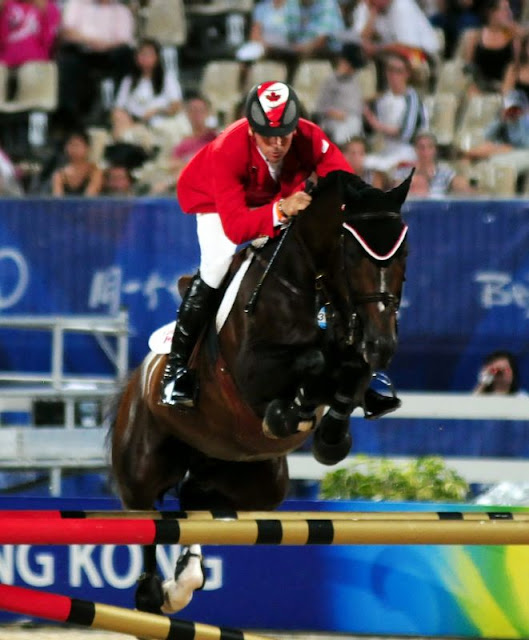 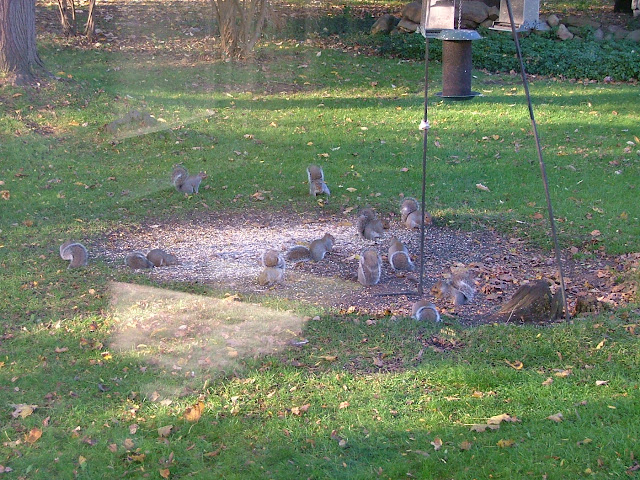 Trick or Treating didn't go so well last night?  Sorry for the poor quality of the picture.  The sun is at a position in the sky right now where I get these miserable reflections on my rear window.

Off to spend the day delivering campaign literature.  I'll catch up on your blogs tonight.
Posted by Louise at 9:17 AM 14 comments:

Louise
I'm an old hippie, who never quite forgot what we were trying to do in those days, though I will admit that a lot of it was silly. After a lifetime of holding down a job, I'm finally retired, as of January, 2010. I've taken to wandering the trails of Western New York, in order to try and learn more about the natural world that surrounds me. In this blog I'll try and share bits about this, and my life in the house I've lived in all of my life.